Time spent with the folks in Otter Lake is well worthwhile, with writing that is witty, contemporary, and winning.
—Kirkus Reviews
A wonderfully entertaining read!
—RT Book Reviews
This story has everything a reader could want—murder, mystery, a love interest, small town, and a flamboyant best friend on the side.
—Night Owl Reviews (Top Pick)
A delightful mystery with laugh-out-loud moments, a touch of romance, and a fun, sassy style. Readers will enjoy every moment spent in Otter Lake.
—Award winning author Diane Kelly
A frolicking good time…with a heroine who challenges Stephanie Plum for the title of funniest sleuth.
—NYT bestselling author Denise Swanson 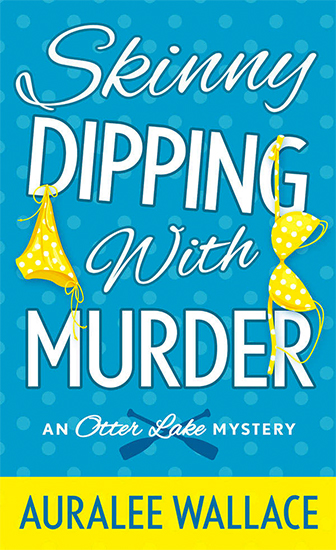 Welcome to Otter Lake, where the relaxing, restorative atmosphere is to die for.

Erica Bloom is in no rush to return to Otter Lake, the site of her mother’s spiritual retreat for women. Erica met her inner goddess years ago and she’s happy to have forged a new identity on her own, thank you very much. But her new-age-y, well-meaning mother is losing her grip on the business, and needs Erica’s help. So she heads back to her New Hampshire hometown, where nothing much has changed—except for maybe the body in the well…

When Erica was a teenager, she fell prey to a practical joke that left her near-naked in Otter Lake’s annual Raspberry Social. The incident was humiliating, but it wasn’t like anyone got killed-until now. Those who were behind that long-ago prank are starting to turn up dead, and Erica’s appearance in town makes her a prime suspect. To make matters worse, the town sheriff just happens to be Erica’s old nemesis, Grady Forrester…who also happens to be hotter than ever. Can Erica find a way to dig up the truth-before someone digs her grave? 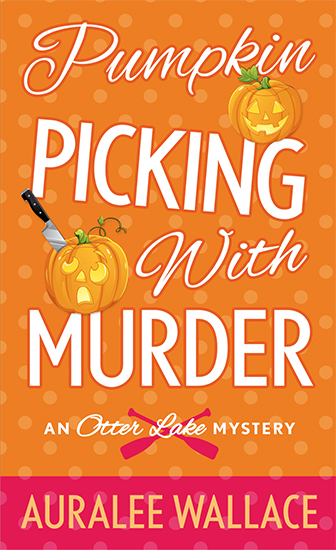 When murder strikes in the Tunnel of Love, Erica Bloom has to rock the boat to catch a killer…

For a small town like Otter Lake, New Hampshire, the annual Fall Festival is a big deal: a Ferris wheel, corn maze, caramel apples and pumpkin pies—even a Tunnel of Love. Back in her hometown, Erica Bloom is trying to enjoy herself, which includes getting better acquainted with Sheriff Grady Forrester. But when a swan boat sails out of the heart-shaped exit of the tunnel with a dead man slumped over a wing, her own romance will have to take a backseat.

Speaking of love affairs, the other passenger in the boat—and only witness to the elderly Mr. Masterson’s swan song—is not his wife. It’s Erica’s beloved and feisty “aunt,” Tweety, who quickly becomes the prime suspect. Vowing to clear Tweety, Erica teams up with her sassy BFF and self-appointed security expert Freddie Ng to solve the murder—despite the objections of Grady, who’s convinced the amateurs are going overboard in their investigation. And he just may be right. But as Erica and Freddie start to dredge up long-kept small-town secrets, will they head straight into troubled waters? 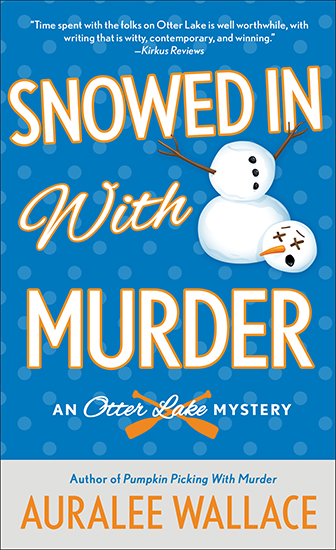 Snowed In with Murder

There’s no retreat and no surrender when Erica Bloom finds herself stuck in a snow storm with a stone-cold killer. . .

Erica has returned to Otter Lake, New Hampshire, to rekindle her romance with Sheriff Grady Forrester at her mom’s island retreat, currently closed for the off season. Just ahead of a rapidly advancing storm front, Erica arrives to discover Mom has rented the lodge to a reality TV show. They’re filming the wealthy but awful Boatright brood, who’ve been summoned here by their patriarch because—so he says—one of them wants to kill him.

Great television, terrible timing. Not only are Erica’s romantic hopes snuffed out like a candle flame, the nasty Nor’easter just became a superstorm…and no one is getting off the island ’til it blows over. When the power fails, it’s lights out for the patriarch. Now, marooned with a murdered millionaire and his feuding family, it’s up to Erica to take the killer by storm and get back to the business of reuniting with Grady—until death do they part! 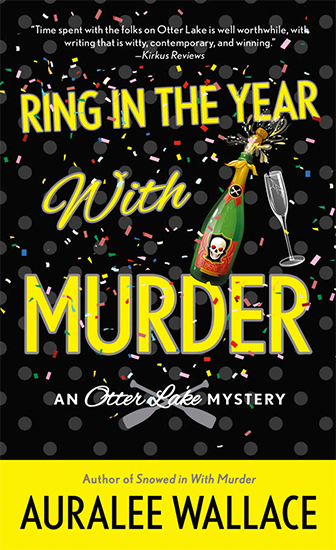 Ring In the Year with Murder

It’s been a tough year for Erica Bloom. And with hours left on the clock and a killer crashing the party, it’s not over yet…

This New Year’s Eve, Erica’s resolution is to have a great night—even if it kills her. She is, after all, at the party to end all parties: a Great Gatsby–themed gala sure to be the talk of Otter Lake, New Hampshire. With her perfectly finger-waved hair, borrowed pearls, and scarlet flapper dress, Erica is determined to be unflappable, despite the presence of her ex, Sheriff Grady Forrester, and his hot date, a bubbly blonde who has a hard time holding her drink. Literally…

In a plot twist as bizarre as a game of Clue, Grady’s girlfriend almost drops dead after her drink is poisoned. Who put the killer ingredient in her appletini? Suddenly the tables have turned and the sheriff has become the prime suspect. Now Erica has until midnight to clear the man she still loves—and in so doing just maybe win him back. That’s if the killer doesn’t pop the cork again… and turn a New Year’s smooch into a kiss of death… 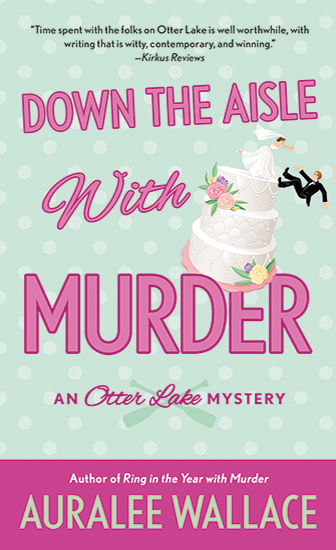 Down the Aisle with Murder

Some wedding stories are so bizarre that you can’t even make them up. Take Erica Bloom’s latest case of an Otter Lake bride whose BFF is MIA at the time she’s supposed to perform her duties as maid of honor. ..only to be found DOA. Erica and her security team—minus her beloved Grady, who’s on vacation, trying to stay out of town business and has a no-nonsense sheriff covering for him—have followed every possible lead to find out what really happened to the young woman. Is her death the result of a bachelorette party gone wildly wrong? Or did someone with cold feet snap—and turn into a cold-blooded killer? These are the questions that must be answered for the nuptials, which at the eleventh hour receive a dramatic makeover, to go off without a hitch…before ’til death do us part. 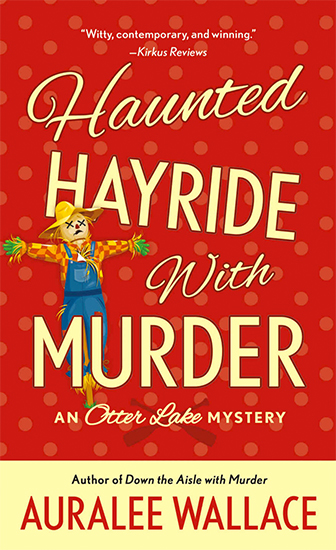 Erica Bloom is loving everything about autumn this year in Otter Lake, New Hampshire: changing leaves, apple cider, cozy sweaters… and the warm and fuzzy relationship that’s heating up between her and Sheriff Grady Forrester. But when some local teens out to find some Halloween thrills come across a boot with a dead man’s foot bones still inside it, a chilling new reality comes into play. Everyone in Otter Lake knows about the age-old witch who haunts the apple orchard bordering the White Mountains. So when the bones turn out to belong to a long-gone local with a scandalous connection to the orchard, stories of the spooky figure roaming the forests at night once again rise up from the past. Now it’s up to Erica and the rest of the Otter Lake Security team to expose the identity of the killer. Will they be able to lay this ghost to rest…or will this witch hunt be their last?

The Otter Lake series is absolutely one of my favorite cozy mystery series. It’s funny, charming, clever, and unique, and I highly recommend it.
—The Bookkeeper’s Apprentice
Pour yourself a big mug of hot cider, curl up in front of the fire, and settle in for a little bit of romance, a little bit of mystery, and a whole lot of wild and wacky fall festival adventures.
—Nights and Weekends

It can’t be emphasized enough just how much humor and joy this series contains. Readers will love this as much as Erica has come to adore Otter Lake itself.
—Kings River Life Magazine

Wallace as created the perfect Halloween read with suspense and mystery lurking just beyond the next page.
—Fresh Fiction